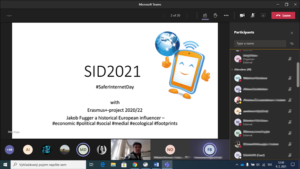 The Jakob-Fugger-Gymnasium’s online workshop on MS-Teams at the safer internet day 2021 dealt with the topic of fake news. At the beginning of the workshop, the pupils were shown a short video clip explaining the relationship between fake news and Jakob Fugger. By using the example of witch hunts, the pupils learned that fake news existed even centuries ago. In order to facilitate a meaningful discussion on fake news, some crucial terms were introduced by a glossary, which included terms such as manipulation, headlines and sources. Subsequently, the group was given a guidebook containing several questions with which one can detect fake news. The following questions, among others, were discussed in this guidebook:

After this theoretical introduction, a practical part, in which the pupils were asked to argue which of two articles dealing with exceptional natural phenomena is telling the truth and which is not, followed. The concluding exercise then aimed at the creation of short headlines on this topic.

The workshop was conducted on a padlet, which allowed the teenagers to interactively participate in the whole process.